Why is it that Zlatan Ibrahimovic isn’t regarded by many people to be in Messi and Ronaldo’s level, even though he is playing as good as them?

For the same reasons that Suárez, Lewandowski, and Benzema are all high-quality players who at their very best could rival Messi and Ronaldo in terms of goals, but are not regarded by many people as on the latter two’s level:

Sadly, one has to check all three boxes.

Ibrahimović’s 20+ years of professional football have been terrific, and his time at Paris Saint-Germain was nothing short of wonderful. You don’t get much better than 113 goals in 122 appearances when you’ve just begun to drop from your peak. Suárez, however, has done that; so too have Lewandowski—who is quite possibly the most complete striker of the bunch-and Benzema.

There is the first box, but there are far too many players out there who have maintained impressive forms in front of goal to have any real consideration for consistency other than the cursory nod and thumbs-up.

Royalty ought to be a rarity; consistency, though valued, is a fairly common commodity.

Influence is a slightly more valued criterion. Here you have players who can and have shown that they can lead the team. Not just as target men but players who embody the values of the team, both on and off the pitch.

One would argue that Ibrahimović’s career really kicked off during his time at Inter Milan, notwithstanding previous stints at Ajax and Juventus (for me, at least, because that was when I first heard of him). It would be unfair to say Ibrahimović benefitted largely from being surrounded by world-class players like Zanetti, Maicon, Cambiasso and Adriano, but it would not be an entirely inaccurate statement, either.

His time at Barcelona was disappointing, but it was not completely his fault. His style of play did not fit in with Barcelona’s burgeoning tiki-taka philosophy, which saw a marked shift from the traditional dependence on an out-and-out striker. But he moved on and quickly found a home in Paris and, quite fittingly, became the king of the Parc des Princes, leading PSG to four consecutive Ligue 1 championships.

He had the flair and arrogance of a club willing to splash more than a handful of cash to boost its ranks. He was the go-to man. He had the skill, the strength, and the poise. He was PSG’s poster child. He had influence, the afterglow of which his national team basks in but sorely misses, even years after his retirement.

But for the past couple of years, we would readily rule out Benzema as being highly influential, since he spent pretty much all his time in the shadow of Cristiano Ronaldo when the Portuguese was at Real Madrid. Suárez was a beacon of hope for Liverpool and has had a more-than-decent national team career, but he is not one to rally his troops to victory when things aren’t going their way.

Lewandowski was at the forefront of Borussia Dortmund’s resurgence under the guidance of Jürgen Klopp. Klopp’s revolutionary gegenpress tactic took the world by storm, but Marco Reus and Mario Götze flanked Lewandowski as the three horsemen of footballing doom. Similarly, Lewandowski has been highly influential at Bayern Munich, but this owes more to the setup around him.

The above players, in summary, have had their fair share of time as undisputed influencers and leaders. Consistency, as you may have observed, isn’t just about the performance in this situation. 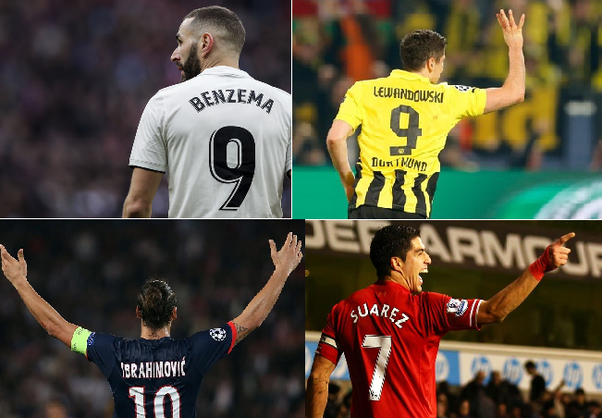 If you can pardon my photo-editing skills…

No one wants to admit it, but the main reason Ibrahimović and his peers aren’t regarded as being on Messi and Ronaldo’s level is that they were not prodigies.

Sure, Ibrahimović was and still is a thrill to watch. Sure, he showed promise, and we suspected he would become who he is today. Sure, I could have prefaced this answer with the last paragraph, but then one would wonder about players like Mario Balotelli, Stephan El Shaarawy, Bojan Krkić, and Alexandre Pato who never really made it despite showing massive potential at a young age. But we would be missing the larger picture.

We’re all inherently wired to seek instant gratification. Basically, football does not grant that. You have, on average, several periods in a game where there’s a lull, and the scores usually are low. Sometimes there are individual flashes of brilliance which, if they lead to victories, make the wait very well worth it—for those who wait. Others may walk out on the game. The world is the others.

In football, the world has a short attention span when it comes to the development of players. We want the thrill, love to be swept away by the young player who dribbles past an entire backline and beats the goalkeeper. We bet on these guys and give them ‘prodigy’ tags. And if they fail to deliver, we move on. For the likes of Balotelli, as Stephen King writes in the Dark Tower series, the world has moved on.

Late-bloomers like Lewandowski and, dare I say, Ibrahimović have trouble negotiating with the sort-of primacy effect the ‘prodigies’ have impressed upon us. It is not to say that they did not have the talent to go all the way. It is that the world was not watching. Sometimes they get plucked from obscurity by managers and famous clubs, upon which the vultures start circling.

Young Messi and Ronaldo were freaks of nature. They were mesmerizing and had us all spellbound. For the past 13+ years, they’ve remained consistent, each pushing the other to astonishing achievements. As they grew, so did their influence. They had and still have teams built around them. Ronaldo was a red devil for Sir Alex Ferguson at Manchester United. And when he moved to Real Madrid, he had the team built around him.

Another important factor, though one not necessary to becoming a great player, is that Ronaldo and Messi evolved as the game changed. Ronaldo went from being a skillful winger to a goal poacher. Messi, on the other hand, has gone from a combination of a false nine and a winger to a traditional number 10, spending much of his time in the midfield and racking up the assists. Being a striker greatly limits one’s chances of evolving, but it takes nothing away from Ibrahimović’s clinically.

Unfortunately, players like him and Lewandowski missed the prodigy train.

Tags: consistencyIbrahimović’s 20+ years of professional footballInfluence.rival Messi and Ronaldothe most complete striker of the bunch
ADVERTISEMENT

THE GRAND OPENING OF EQUAL RIGHTS RESTAURANT IN OJODU: An apparent upgrade from Salawu’s family to incites habitual vendee

SANWO-OLU: We’ll provide support for digital switch over in Lagos